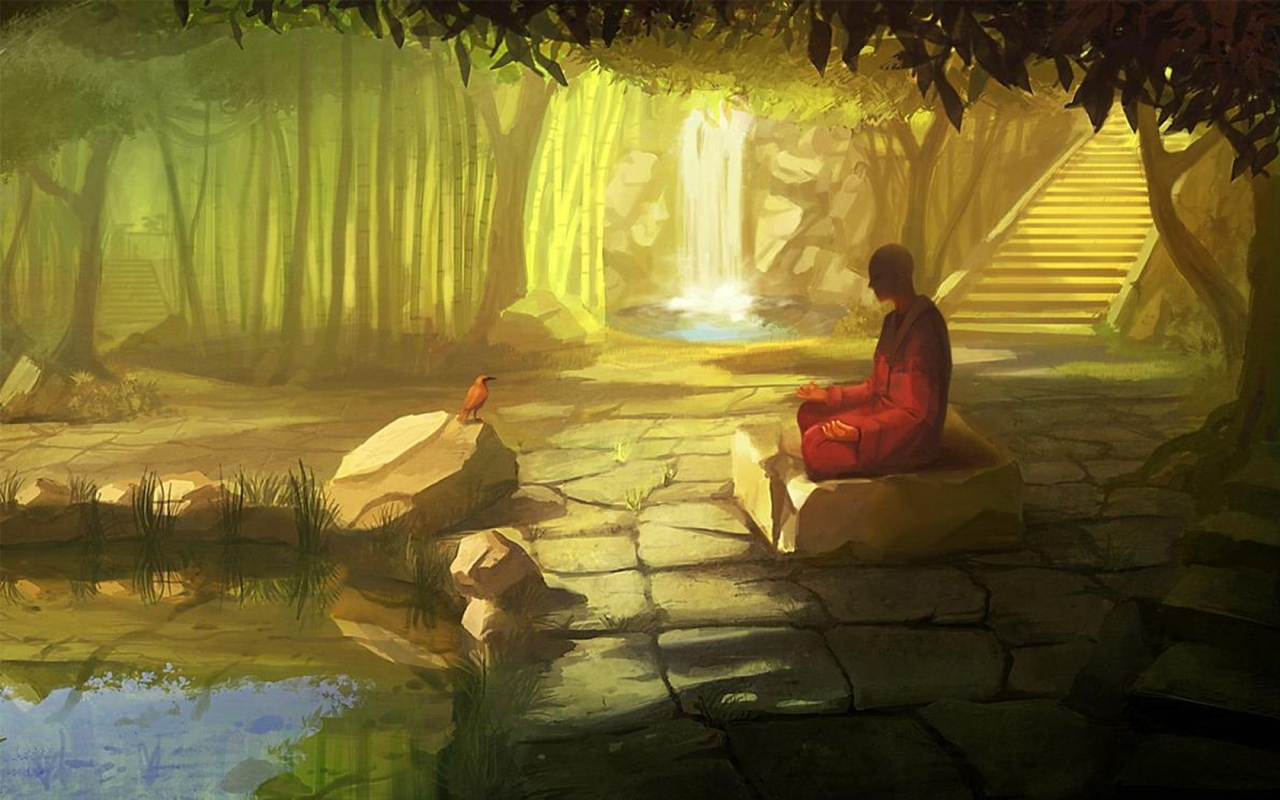 Home ESX/ESXi Linux: Linux From Scratch as a Virtual Machine on a VMware Workstation
ESX/ESXiLinux

Linux: Linux From Scratch as a Virtual Machine on a VMware Workstation

Linux from scratch is a web-site that gives you step-by-step instructions on how to build your own version of Linux. It’s a minimal install, without any GUI even DHCP is not configured by default. The instructions are fairly straightforward but they don’t refer to any type of hardware. In this article I’ll describe how to build a bootable Linux as a VM on VMware Workstation. I strongly suggest that you read through the entire book. I’ll use shortcuts and skip stuff that’s not necessary, so it’s better to have the book in front of you.

You’ll need VMware Workstation (I used version 9.0.2), LiveCD of CentOS version 6.4, putty and the LFS book v7.3. Make sure you can allocate 2GB of RAM, 20GB disk and if you can, add 2 CPUs for faster compilation.

Boot from the LiveCD and once you see the CentOS running, open the terminal from the Applications menu.

If you see /dev/sda at the end of the output, you are OK. In addition do:

Make sure that you have an IP assigned to eth0 interface and that you can actually browse the internet (e.g. ping www.yahoo.com should resolve to some IP). Write down the IP, subnet mask, gateway and the broadcast IP. You’ll need these later. Then log as root.

These commands enable and start the ssh daemon and disable and stop the firewall. The last command asks you to change the root password. We’ll use putty instead of the VM console, because it’s easier to copy and paste text from the book. Create a new putty session and log as root using the password that you’ve just changed and IP address that you got from ifconfig output. Now, copy and paste the script on page xviii from the book. Most likely, you’ll see an output like this. 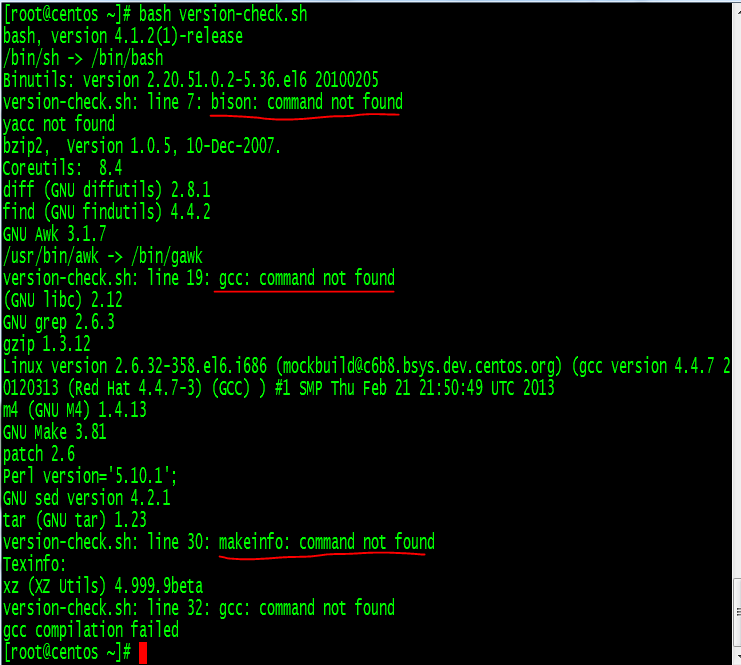 This tells us that we need bison, gcc and texinfo. Install them.

Mind that you are installing these programs on a RAM disk, not on a drive, so if you decide to take a break, shut down the VM and continue later, you won’t be able to do so. You’ll have to do everything from the beginning.

Now it’s time to create the partitions. We’ll create one root partition and one swap. 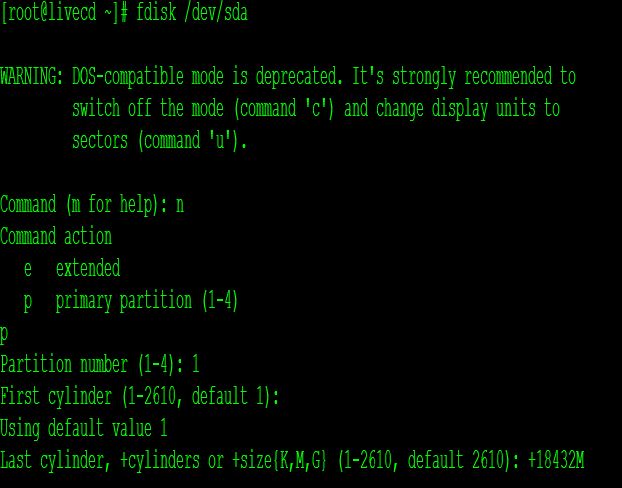 Create the swap now. Again, use n for a new partition, p for a primary primary partition and use default values afterwards. This will create a swap partition using the rest of the disk. Finally, type t to change the the type of the partition number 2, and use code 82 for swap. 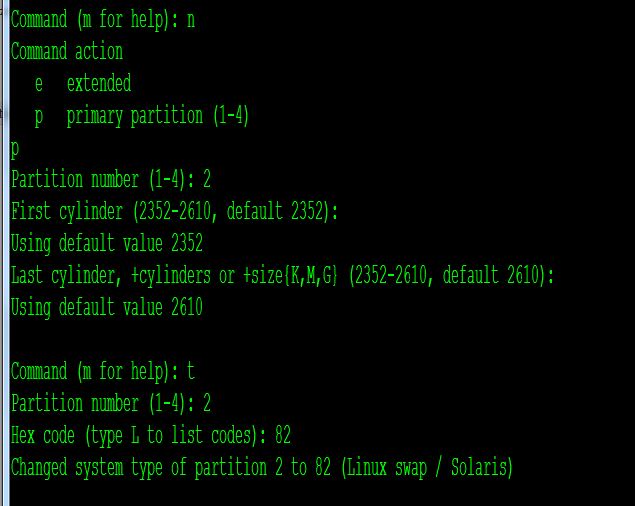 Write the changes using w and then do:

You should have an output like this at the end. 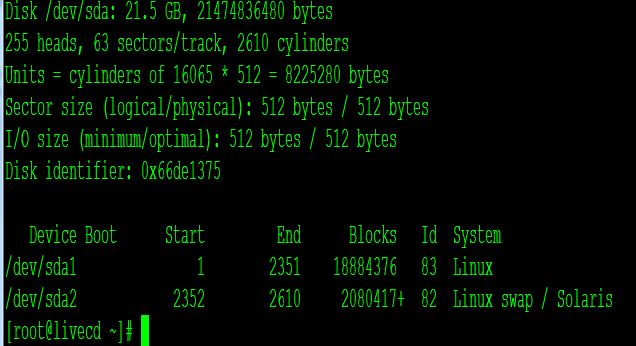 Look at page 15, paragraph 2.4. Mounting the New Partition and execute those commands. Replace with sda1. We won’t have any separate partition for /usr, so the commands are: 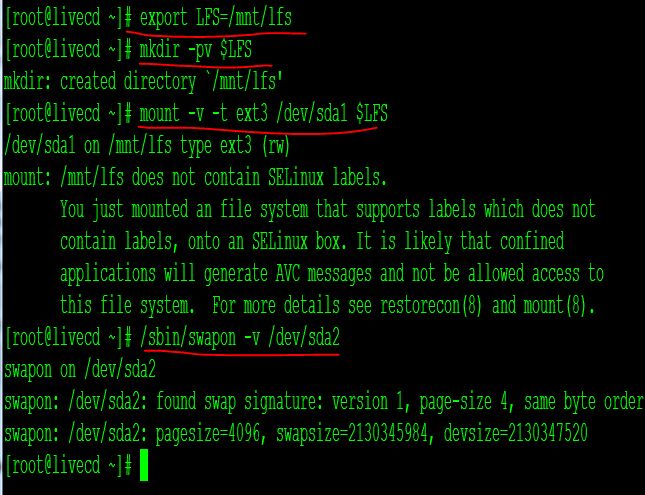 At this point if you want to shut down the VM and continue later, you’ll still have to go through enabling sshd, disabling firewall, installing gcc, bison…and executing the commands for defining the LFS. The only thing that you don’t have to do is the fdisk part and creating partitions.

The next part deals with downloading all of the necessary programs. I made a list with the URL links, so download this file file, once it opens up in a browser, select all, copy, then go back to your putty session. There, type:

Then hit i key, right-click to paste, hit ESC and then hit :wq to save and quit. You should have a file called wget-list. Type the following command to verify.

Make sure that you are actually in sources folder by issuing pwd command.

Now, execute wget to download all of the sources.

The only program that I had problems downloading it was zlib, so you can execute this command below. Hit ENTER once it completes. In addition, when you start the installation of all these 71 files that you’ve downloaded, some might be missing in case some of the URLs change. In that case, just google e.g. zlib-1.2.tar.bz2 for example and once you found the link, do wget link. Same thing that I did with zlib (command below).

Once all files are downloaded, type:

You should have 72 as a result. 71 files + the wget-list file. If the number is not correct, scroll up in putty and see what failed. You might also want to increase the number of scrollback buffer lines in putty.

Now that we have all the sources downloaded, we need to install them. This is a screenshot from the book. It says that it is very important and it is.

In other words, once you are in /mnt/lfs/sources, you’ll be doing tar xvf for all sources as described starting as of page 35. For example for the first source you’ll do:

IMPORTANT: make sure that you are in /mnt/lfs/sources, do tar xvf whatever.gz or tar xvf whatever.xz. Once the files are extracted you’ll have to cd to that directory and follow up the instructions for compiling the source. Once you are done, go back using cd .., and then delete the source extract folder with rm -Rf binutils-2.23.1 and any other directories that you were instructed to do so. If you don’t do that, you’ll have problems when compiling these same programs later.

So, for the first program we’ll have to execute:

The book mentions something called SBU (Standard Build Unit). For Binutils, SBU is 1.0 (you’ll see SBU value for all sources in the book). The SBU value depends on your hardware. On my laptop 1 SBU is about 5 mins. To check how much is 1 SBU on your computer, do time make -j2 when compiling binutils. So, when it tells you to do make, do make -j2. If the book says it will take 5 SBUs, it means it takes about 25 minutes.

If you get an error when you do make install, type exit and then:

From now on, everything should be straightforward as described in the book. Follow the instructions to build the rest of the sources and stop once you reach page 74.

Then, follow up instructions closely up to page 85. Once you reach page 86, make sure that you are in /sources folder. This is the same /mnt/lfs/sources folder, but this time you are running in chroot environment. At this point, LFS does not have to be defined. The same rules apply here as well: Make sure you are in /sources environment, extract the tarball with tar xvf, cd to that folder and follow up the instructions. For example, for the first tarball, do:

Similarly to what you did before, just follow up instructions for all tarballs. Pay special attention for the checks especially for binutils, gcc and mpfr. Once you reach page 196, feel free to skip paragraph 6.63 About Debugging Symbols and 6.64 Stripping Again. Now, type:

and re-enter again with:

Mind that DHCP won’t work. There is a section in the book Beyond LFS that explains how to use DHCP. For now, just pick up a static IP that you can use. If your NIC in VMware Workstation is set for “Bridged”, then use an IP that’s in the same subnet as your Windows 7 host. If you use NAT, then the IP will most likely be in 192.168.something segment. Next, create the resolv.conf file. I use my provider’s DNS and one Google’s DNS. In my case it looks like this. If you are not on a Comcast network, put Google’s DNS first. 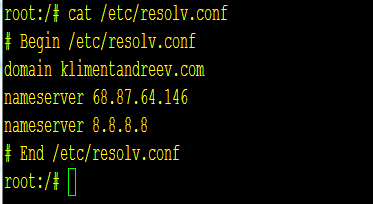 Create the /etc/hosts file as described on page 203. In my case, it looks like this.

Read everything up to page 209, when you need to install the bootscripts. Then, configure Sysvinit as described in paragraph 7.7.1 Configuring Sysvinit. Follow the instructions up to page 222 and for the locale on page 222 use en_US.iso88591. 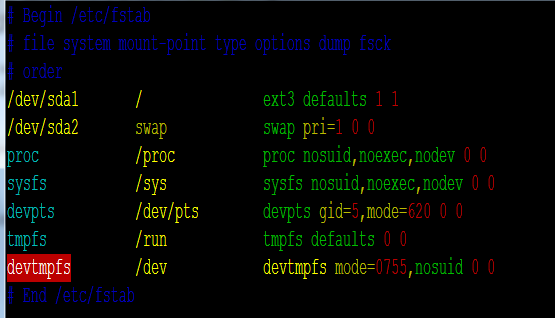 Now, the most important part comes with the kernel configuration and compiling. The book is vague about what options to use, and if you don’t use the proper options, the server will boot up and stop with a kernel panic error.

When this screen shows up, make sure you know how to navigate and select/deselect options. It’s fairly simple. 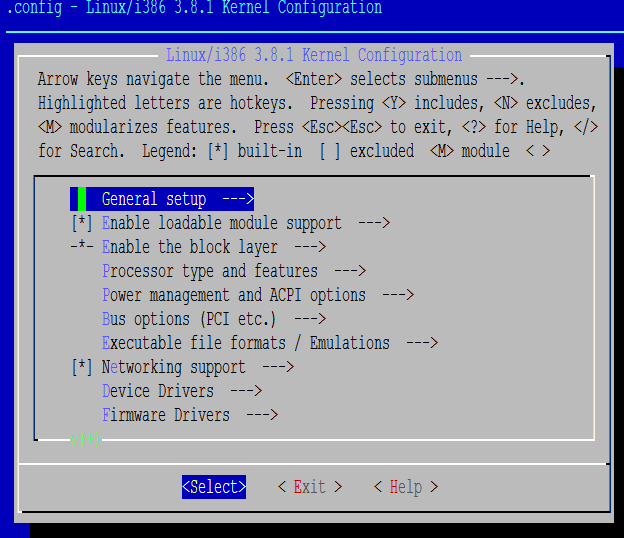 For LFS to work as a VM, you must select (built-in, not module):

Once you exit the kernel configuration, do:

Now, install the GRUB bootloader with:

When it completes, create the bootloader config file with:

Command set root=hd(0,1) means we will use first hard drive (0) and the first partition (1). The syntax is misleading, but it’s how it works. The parameter root=/dev/sda1 means that /dev/sda1 is where our root partition is.

That’s it. Follow the simple clean-up in paragraph 9. The End, and reboot with:

At this point, you want to disconnect the ISO image that you used to boot CentOS, so the VM boots up from the HDD, not the ISO image. If everything is OK, you’ll see the GRUB loader. 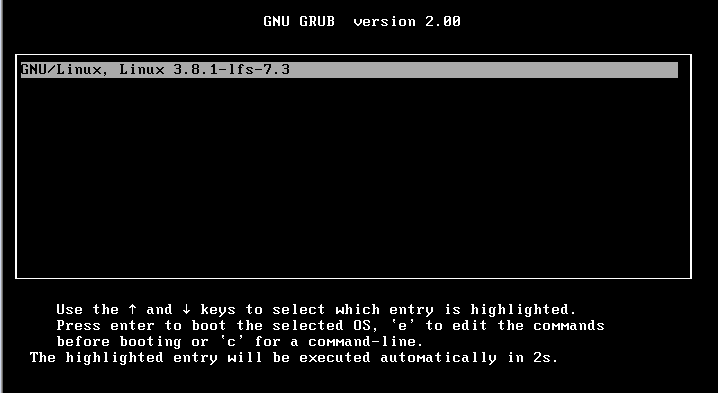 ….and if the kernel was properly configured and compiled, you’ll get the root prompt. 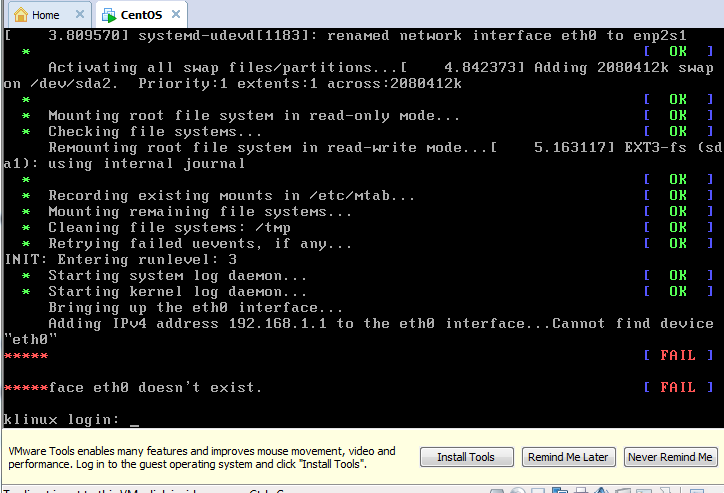 From the last screenshot, you can see that the NIC card was not recognized as eth0. But, look closer at the top of the screenshot and you’ll see that the NIC was renamed as enp2s1. That’s because of the udev scripts. I didn’t have any success in making the NIC work as eth0, so in order to make the NIC work, just log as root. Then:

As previously mentioned, make sure you assign a static IP (you wrote down that IP from the beginning, right?) that can reach the outside world, either by using NAT or Bridged settings under NIC settings in VMware Workstation.

Once you are able to ping the outside world, I can only say CONGRATULATIONS!!!

Rocky Linux: Install the pre-release on VMware and...

This is really help to me.

I was stuck without doing above.

Thank u very much.

The tutorial described here is for v7.3. 7.5 is most likely different.