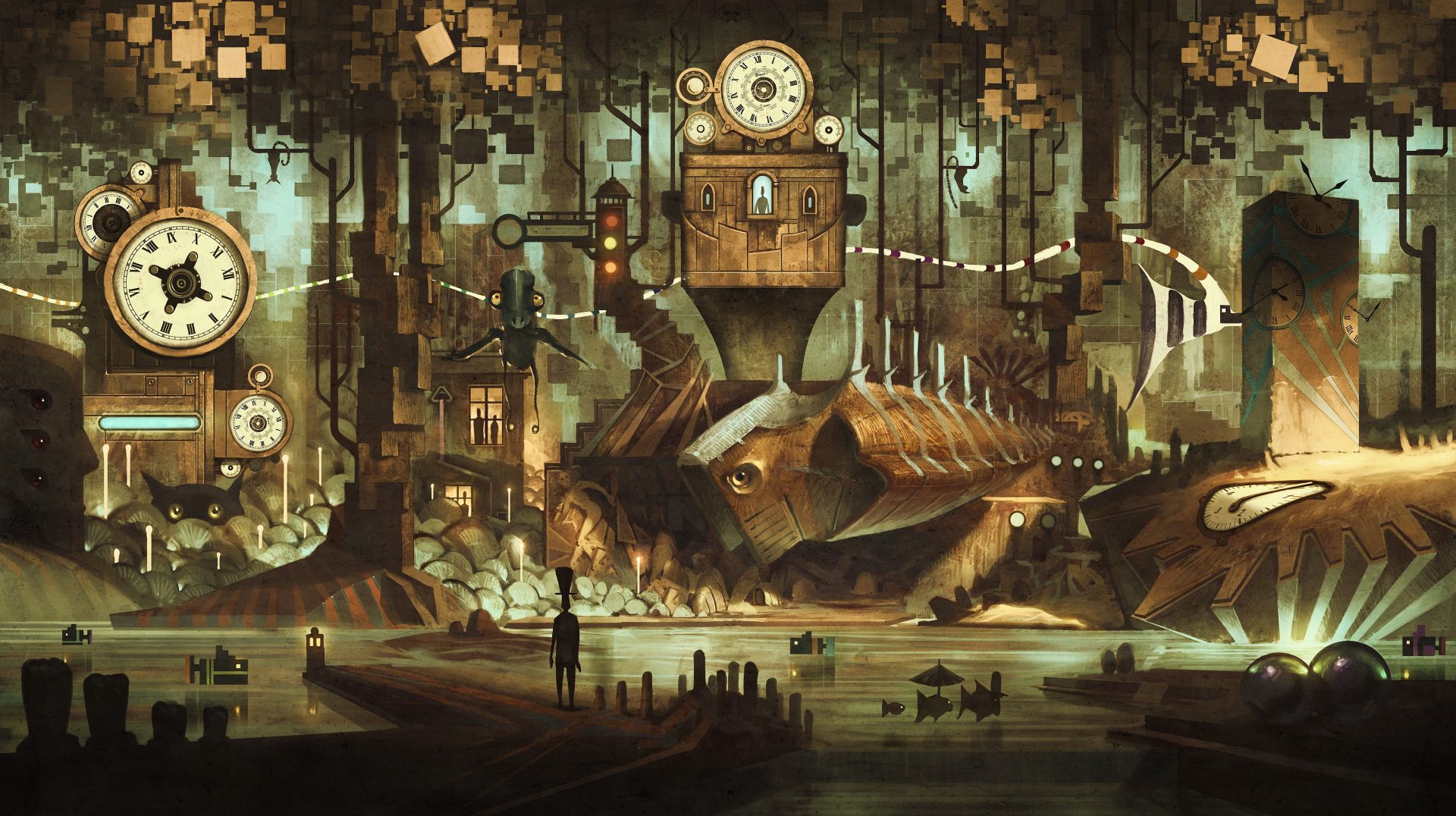 As the title says, I’ll create two web servers in a private subnet, put an Application Load Balancer in front and protect the content with Web Application Firewall (WAF). In addition, I’ll create a bastion host so I can access the web servers using SSH. Web Servers are not reachable from the Internet.

First thing to do is to create an Elastic IP for the NAT gateway. NAT gateway is needed if you want to give the Web Servers Internet access so they can be patched. Go to Elastic IPs under Network & Security in EC2 menu and click on Allocate Elastic IP address in the top right corner. Accept the defaults and click Allocate. 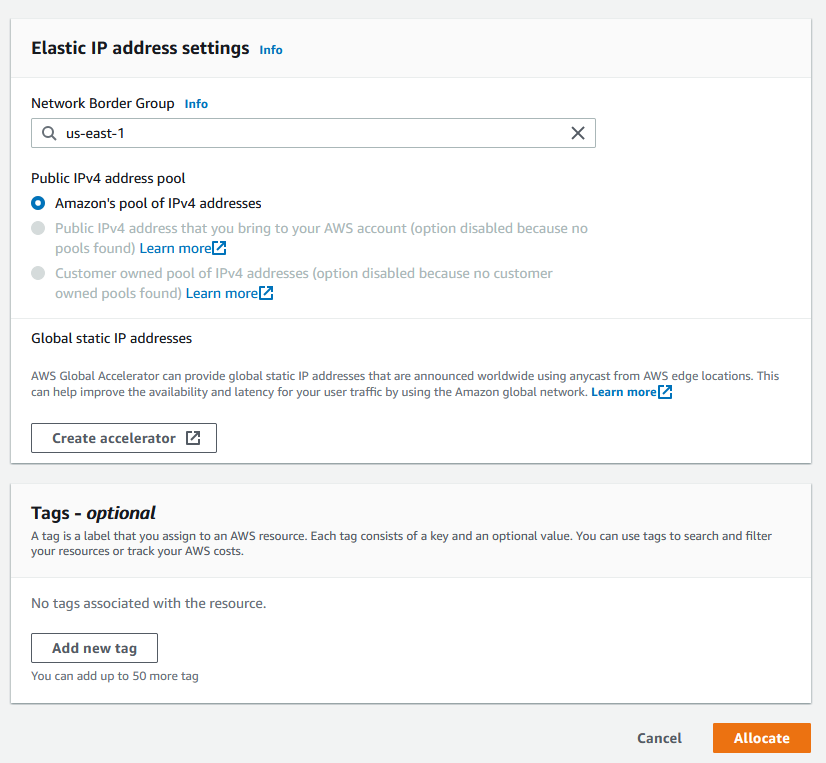 We’ll create a VPC with two public and two private subnets. Minimum two public subnets are needed for the Application Load Balancer. You can’t create an ALB with one public subnet.
Click on Launch VPC Wizard in the VPC menu and select VPC with Public and Private Subnets. I’ll use this CIDR (192.168.100.0/22) which gives me 1024 hosts enough for 4 Class C /24 subnets, you can use whatever CIDR you want. As you can see I’ll use 192.168.100.0/24 for the first public subnet and 192.168.102.0/24 for the first private subnet. I’ll create the other public and private subnet later. You’ll have to associate the Elastic IP that you created in the previous step to the NAT gateway. Click Create VPC in the bottom right corner. 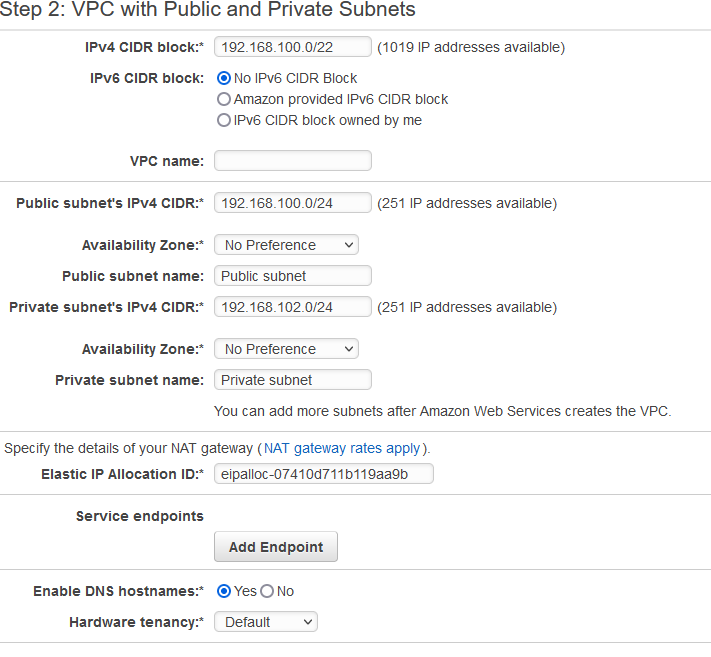 Go to Subnets menu click on the public subnet and look at the Availability Zone. 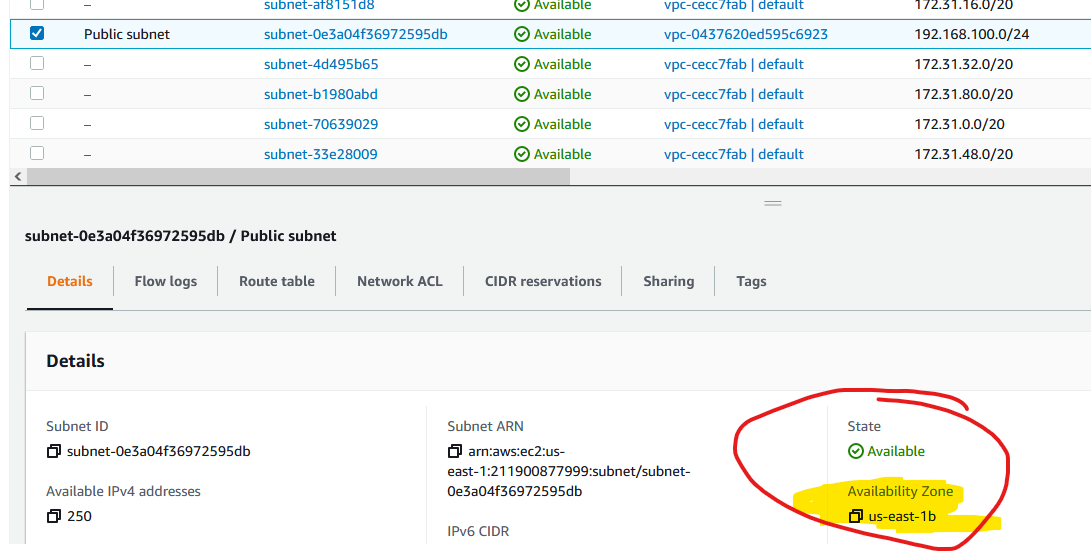 When you create the next subnet, you have to put it on another zone.
Click on the Route table tab. Remember/write-down the route table id (rtb-0e3cbsomething). It will be different for you. 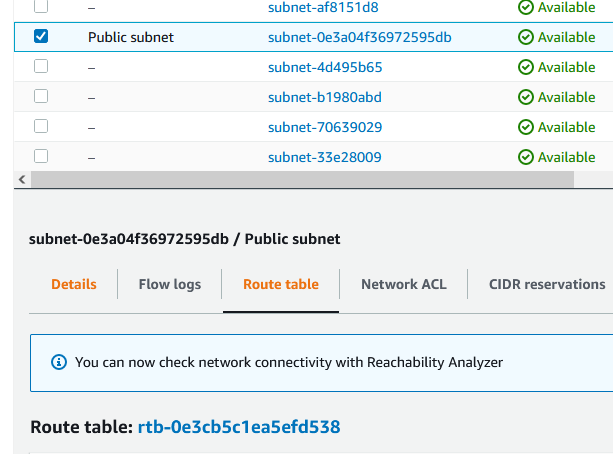 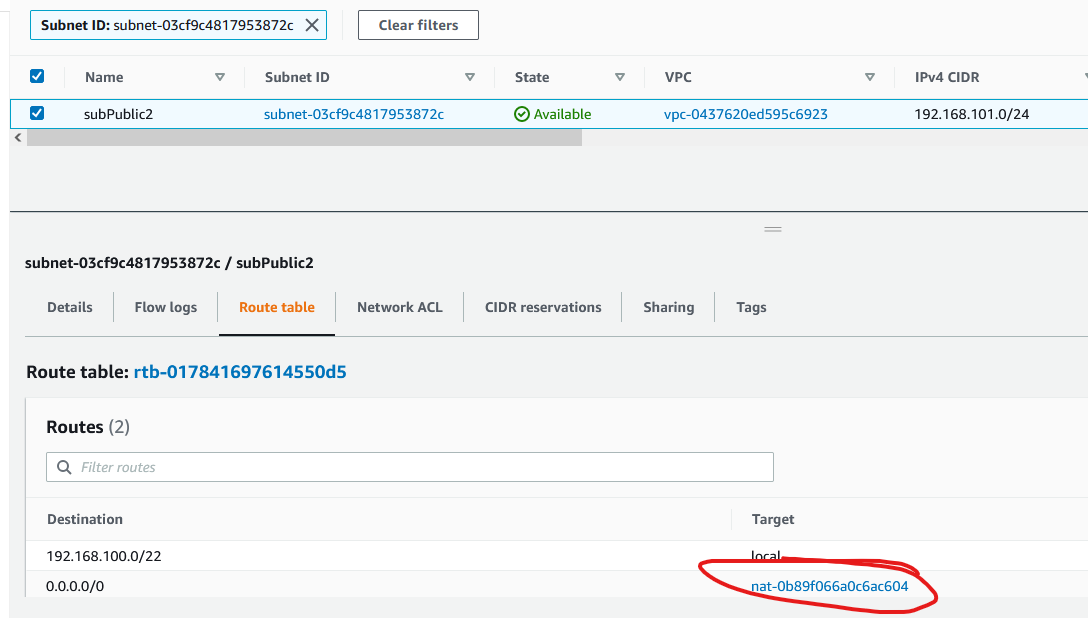 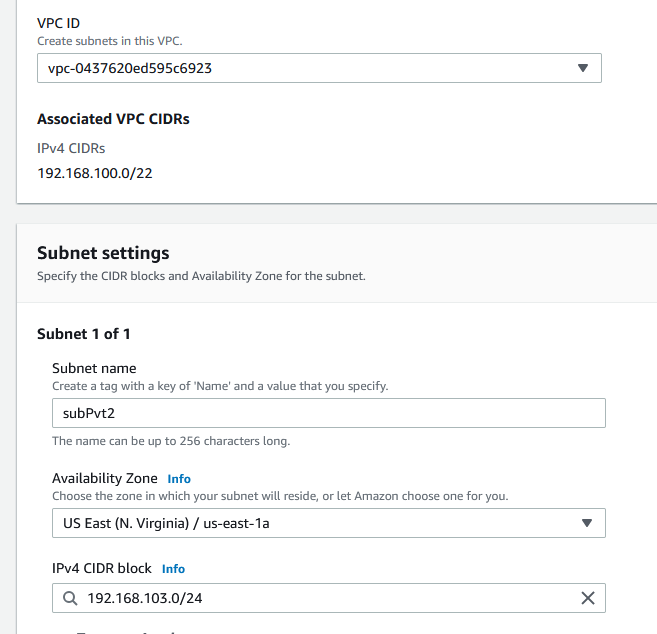 Log to the bastion host using the key you created. Now, we’ll connect to the web servers from the bastion host. If you used the same key for bastion host and web servers, copy and paste the PEM certificate in a file called key.pem or whatever. If you used different keys, it doesn’t matter, just make sure you have the keys as a file on the bastion host. I used the same key, which is not the best practice, but for the sake of simplicity, I have a file called key.pem on the bastion host. Log to each web server using ssh [email protected] -i key.pem where ec2-user is the user for the AWS Linux (it differs for different Linux distros), 192.168.102.176 is the IP of the first web server and the parameter -i tells which key file certificate to use. Make sure you do chmod 600 key.pem so you can log in. You should be able to log in to both web servers.

Log to each web server and execute these commands to install Apache web server, start it and enable to start on boot.

Then on each server do this. Do Server 2 on the second server. This is just an example. You need the same code on both web servers. The difference is because we’ll test the ALB later and see how the page changes.

For the 2nd server. From the EC2 menu on the left side, go to Load Balancing and click on Load Balancers. Click on Create Load Balancer. Choose Application Load Balancer. Make sure you choose the public subnets and for the security group use the one that we created earlier for the load balancer. 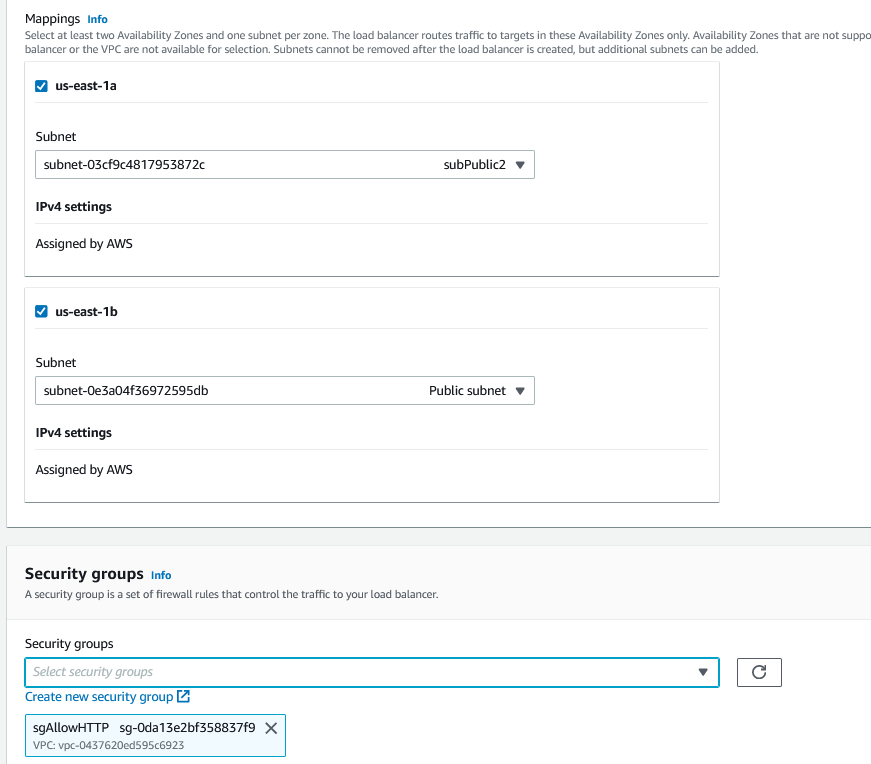 If you scroll down, you’ll see that you need to create a target group for the ALB. The target is our web servers. Click on Create target group. It will open up a new browser window. Choose Instances, name the target group, leave HTTP1 for protocol and for the Health checks type /index.html. Remember, we created these files earlier. 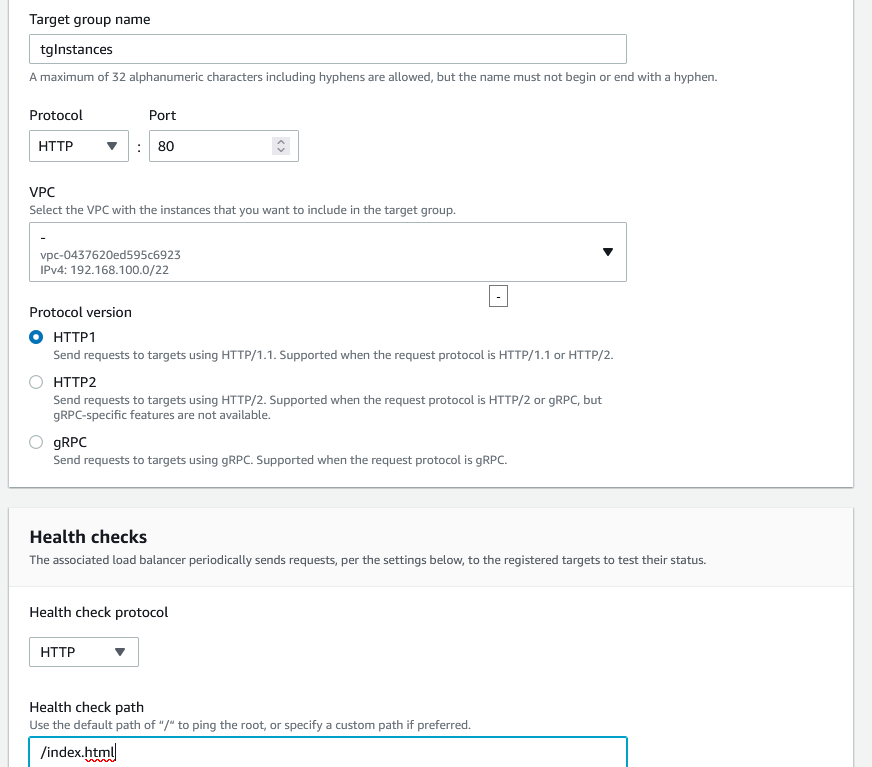 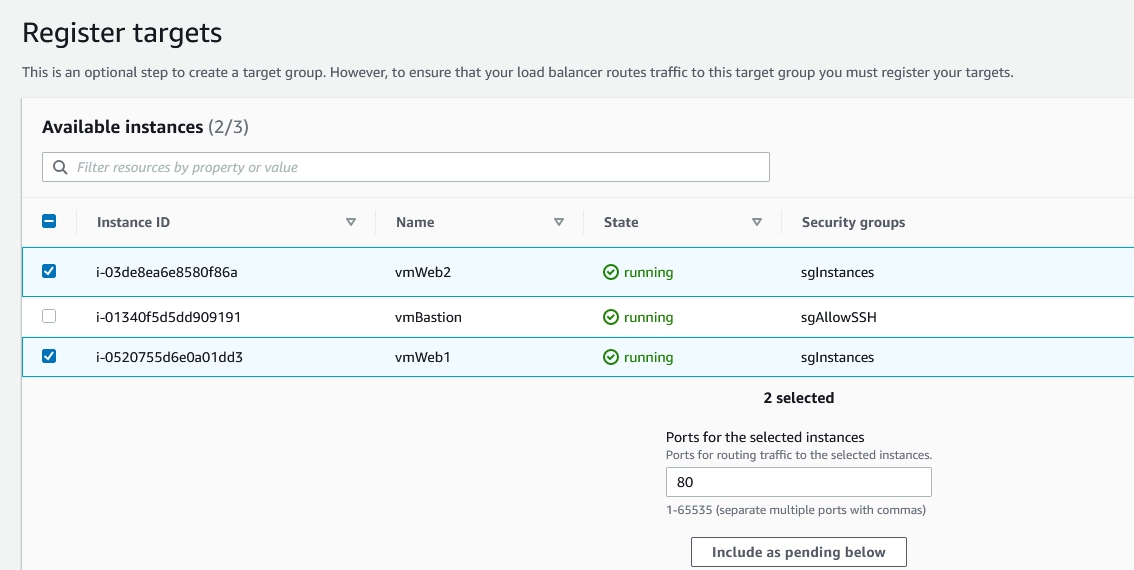 Finally, click on Create target group.
Go back to the original tab when you created the load balancer, click on the refresh button and choose the target group you just created.

Scroll down and click on Create load balancer.
Wait for a couple minutes until you see that the state changes to Active. Click Refresh on the right side. Before you do anything, go to the Target Groups menu under Load Balancing. You should see both instances as healthy. If this looks good, go back to the load balancer and get the URL.

Open up a new browser window and go to that URL. Click refresh in your browser several times. You’ll see how it changes from Server 1 to Server 2.

If everything is OK, proceed further.

The good news is that you can directly create your rules from the ALB. Click on the load balancer you created and click on the Integrated services tab. Click on Create Web ACL. Name the ACL and click on Add AWS resources where we gonna add the ALB. 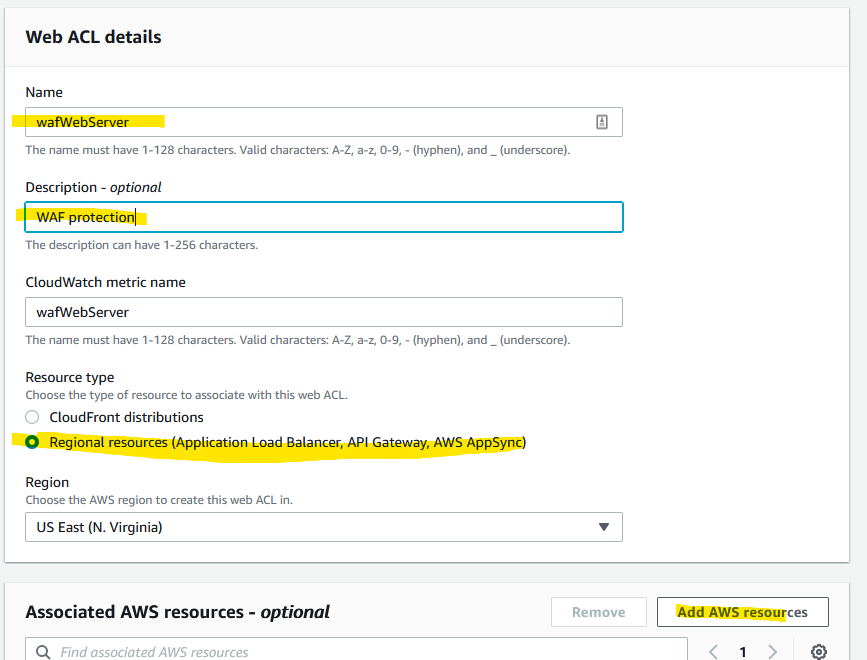 Once you add these rules, you can see what’s blocked and what’s not under Cloud Watch | All metrics | WAFV2.